It is a very small parasite that can only be seen under a microscope and that lives in the intestines of animals. This parasite is found in the small intestines of cats. Unlike many other parasites found in our feline friends, Giardia is not a worm, but a small protozoan.

In general, cats become infected with giardia after swallowing cysts (like eggs) that are present in their environment and that contain the infectious form of the parasite: the trophozoite. Transmission uses the fecal-oral route, i.e. the cats have to eat contaminated feces. After being ingested, the cysts release trophozoites that start to reproduce in the digestive system. The parasite then forms other cysts that lodge in the colon in order to be excreted later in the feces. The life cycle of giardia varies between 5 and 16 days in cats. It begins when the cysts are ingested and ends when the animal passes it in its stool.
The cysts can survive up to 7 months in a favorable environment, so it is important to disinfect well when an animal carries giardia.

This parasite is very contagious between animals and can also be transmitted to humans. As mentioned earlier, transmission is fecal-oral, so it is important to wash your hands after coming in contact with an infected animal.

The main symptoms are diarrhea which may contain mucus or blood. In general, giardia is investigated when diarrhea persists after giving regular dewormers.

HOW IT IS TREATED

Since giardia passes in the stool intermittently (i.e. an infected pet will not systematically pass cysts in its stools), diagnosing and treating giardia can be more complicated than other parasites.
Since giardia is not visible to the naked eye, a fecal test at the vet is necessary to make the diagnosis. Be aware that if your cat has symptoms and the test comes back negative, it doesn’t necessarily mean it isn’t feline giardiasis. In fact, three negative fecal tests are needed to rule out parasitosis.
Once the diagnosis is established, each infected animal is treated with an appropriate dewormer for as long as they present symptoms.
According to new recommendations, an animal without symptoms shouldn’t be treated to avoid the parasite becoming resistant to the deworming medicine.

Many pets with giardia have no symptoms and no problems related to this parasite. Giardia affects cats that are young or ill more severely.

The best way to prevent against giardia is hand washing and disinfection of the environment! 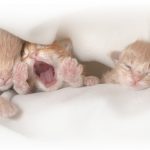