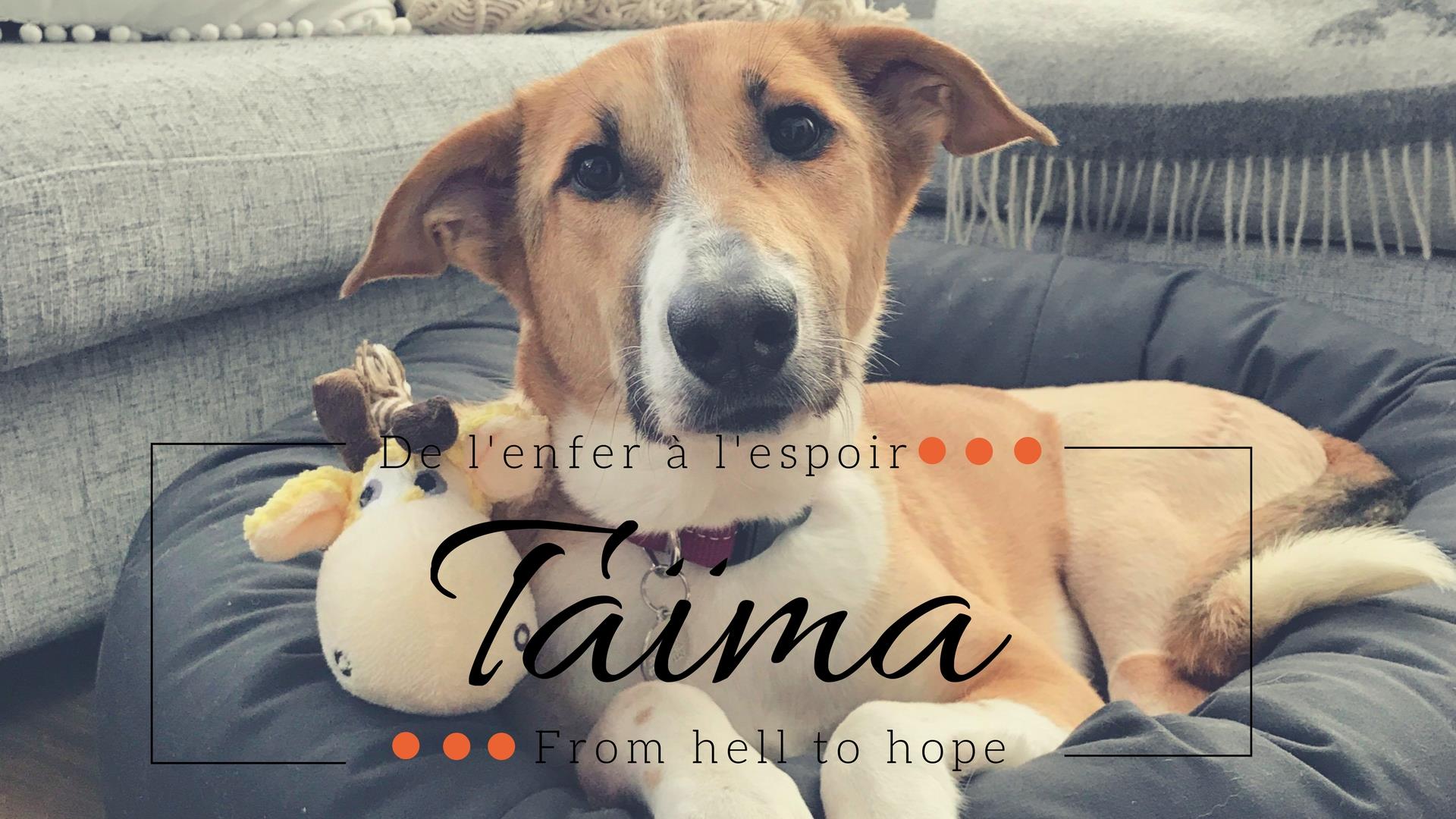 My name is Taïma and I am a victim of animal cruelty.

I arrived in Quebec on December 4th, almost unable to walk.
I had to carry from the cargo to the car waiting for me.

I was born in Jordania and grew up there.
A few months ago, when I was one year old, humans tried to kill me horribly.

I was walking quietly as usual when I was shot on a paw … then a second.
Under the impact, I hurtled down the hill where I was …
As if all that was not enough, I was shot in the two remaining legs, probably to be certain that I could never go up that hill again…

In shock and unable to lift me to save me so much I suffered, I thought my time had come … already, barely after a year of life.

That’s when, as witnesses to the scene, other humans appeared to see if I was still alive .. Seeing that I was, they lifted me up and brought home, even though I tried to bite them because I was scared and atrociously in bad shape ..

They tried somehow to look after me in their house for a while.
Seeing that my health worsened, they finally made the decision to take me to see a doctor to end my suffering.

Once there, the vet saw how much I wanted to live and offered to take care of me. That’s when tests were done to see exactly what was happening and why I could not get up …

X-rays of my paws showed several things.
First, I had 3 legs on 4 broken after the bullet impacts …
In addition, by tumbling from the hill, I had fractured my hips in several places …

As the veterinarian in Jordania did not have the equipment or skills to treat such fractures, she searched help from agencies in more developed countries.

So I was told that I was going to fly to Les Aristopattes, an organization in Canada.

Her arrival in Quebec

That’s how, after several hours of flying, I landed in Montreal on December 4th.
There, two people were waiting for me impatiently. Tony and Christine came to pick me up to take me directly to the Aristopaws’ president, who had already prepared everything so that I would be examined and supported by a team of specialists upon my arrival. Tony and Christine have waited hours at the airport for me to finally get out of the cargo. They did my transport voluntarily to the president’s home of the organization where I changed car to go to the Veterinary Center South Shore, where the team was waiting for me.

On the spot, I met Dr Louis Huneault, Dr Rebecca de Arburn Parent and Dr Catherine Fillion Brochu. They examined my legs and saw the old X-rays, wondering how they could help me. That’s when, under the eyes of everyone, I decided to show them that I wanted help, that I wanted to live! So I made an immense effort, I got up standing and I took a few steps! It was before their amazed eyes that I heard: “We will find something to help you my beautiful Taïma!”

They took over new x-rays and saw that the first thing to do so I walk was to operate my pelvis.
I also had several wounds caused by bullets that had become infected, so I started taking antibiotics.

I was then taken to the Laennec Veterinary Clinic for a general health exam and additional tests. There, I met Dr Patrick Lambert and his team. My general review revealed nothing alarming. A complete blood test was requested and revealed anemia, which meant that I had to wait a little for my pelvis surgery. So I was prescribed anti-pain and anti-inflammatory and I had the chance to go and rest at Maxime’s, my first family home!

Two weeks later, I returned to the CVRS for my very first surgery: the one to give my pelvis mobility ! Thanks to the Aristopaws, my godparents and all those who made small or large donations, I was able to go to surgery quickly! I will always be indebted to these people.

The surgery went very well and it was now time for recovery.

I was able to walk slowly again, not without pain.
I was very lucky to have Dr. Fillion Brochu fall in love with me when I arrived in Quebec. So I changed my foster family to live with her, which makes my treatments and follow-ups much easier. I do physiotherapy several times a week so that one day maybe I can finally walk and run like a real dog! Now that the case of my pelvis is almost settled, there is however another big problem: the infection in my front paw does not want to heal!

Your help is needed!

I’ve been on antibiotics since December, yet despite treatments and antibiotic changes, nothing seems to work.

My bone is being eaten by infection and the only solution left for me to keep my paw is surgery. This surgery would be to go clean all the infection and remove the bone chips in my paw.

However, the organization needs you because the amount of surgery is $3000. I’m not the only one who needs help … Recently, we lost a friend: Sky. His last bill was also very high, which means that the emergency fund normally kept by Les Aristopattes is almost dry. It was not their fault after all, Sky was dying and we had to act immediately!

Now it’s my turn: I need your help. I want this story to be behind me. I want to be able to stop suffering to forget that there are very bad humans on this Earth.

You can help me by clicking the link here !

Taima2018-03-122018-03-12https://aristopattes.ca/wp-content/uploads/2017/07/logo.pngLes Aristopatteshttps://aristopattes.ca/wp-content/uploads/2018/03/taima.jpg200px200px
About
The Aristopaws is a non-profit organization that takes care of abandonned and stray pets who are also sick. We are the only organization with this specialization. We take the cases that the other rescues can't, because of the lack of funds
Register to our newsletter
© 2021 Les Aristopattes. Digital Agency - by My Little Big Web.

The Origin of Tibbers’ OrphanageOur cases

A New Partnership for the Aristopaws !News